By Roger Hawkins on November 19, 2016 in Uncategorized

In Zen, generosity is an important devotional practice. We can find a context for generosity–which can make our practice come alive–by contemplating one of our Zen ancestors, Dogen Zenji’s sayings from The Shobogenzo: “When one attains the Way, the Way is always left to the Way.” When the Way is left to the Way, there is no need to add anything, seek anything or move away from anything that is happening. We are totally immersed in the Way, with the vitality of awareness. The Way is also called the great emptiness or the great fullness. The great fullness is so full that we cannot find anything separate from it. We cannot find any thing at all.

Brother David Steindl-Rast describes gratefulness as great fullness. We are grateful that the Great Spirit shares its great fullness of life with us. What a relief not to have any place to put our ego, it has no seaparate existence of its own. The ego can be thought of as a cipher, huge as an ocean within us that sucks up all our energy. What a relief to release some of that pent-up energy and offer it to the buddhas. As profound as our offering, so inexhaustible is the gratitude of the buddhas for our willingness to share our lives with them. With enormous fullness, they receive our offerings.

Of course there are some events we cannot summon up gratitude for; but these are truly opportunities to open up as much as we can to the great fullness. Regardless of our limitations, the buddhas are just as thankful for our best efforts. From the viewpoint of the buddhas, their fullness includes our limitations. We only need to cultivate the ability to see our catastrophes as opportunities. They are opportunities to remember the most important thing. My way of expressing the most important thing is to remember to receive the gifts of life as they are, and this includes the willingness to make efforts to help all beings. This is how we receive the power of our inconceivable life force, and simultaneously it is how we are re energized, refueled in our life. Spiritual energy comes from our spiritual aspirations, the true spirit of these aspirations comes from receiving our life as it is given to us in the present moment.

So we leave the Way to the Way. And we can be grateful that the Way leaves us to us. The sun is an equal opportunity provider, rising each morning, shining on everything with its peaceful warmth, revealing everything just as it is. Likewise the light of the Way shines equally on all its creations, leaving us to us. As we learn to expose ourselves more and more to the gifts of this life, we gradually realize our oneness. We realize that in leaving us to us, the Way offers us everything.

Let our gratitude extend to the opportunities presented by others. Let us see how upset and frustrated we still become when someone offends us in a way that pushes our buttons of pain and fear. Let us see how taking offense is the same as giving offense. So we can cultivate a spirit of thank-you-very-much for providing this opportunity, painful as it may be. And thank you very much, buddhas, for providing others with a chance to give us these opportunities.

Thank you very much, buddhas, for giving us a way to overcome our fears of exposure to the great unknown. Thank you, buddhas, for giving others the opportunity to receive the gift of our response. Confucius said “When you see virtuous behavior, emulate it. When you see harmful behavior, look at yourself.” May all beings learn to heed Confucius’s advice, and in their anger or denial, look to themselves.

2
By Roger Hawkins on November 5, 2016 in Uncategorized

I’ve been reading a bit about Krishna Das, the musician whose devotional songs have inspired so many people. His guru is Neem Karoli Baba, Maharajji, Ram Dass’ guru. He was gifted with a few days of precious time with him several months before his death. He related an encounter with Maharajji which speaks very powerfully to me of the presence of courage in the face of fear:

We were together with our eyes closed for a long time. All of a sudden Maharajji sits up, looks at me, and says, ‘Courage is a really big thing’. All I could think was, ‘What’s gonna happen? I don’t think I can deal with it!’

The other devotee present said, ‘Oh but Baba, God takes care of his devotees.’

Maharajji shot him a look, then looked back at me, and said, ‘Courage is a really big thing.’ And he closed his eyes again.

and it was enough.

When we can intimately relate with the experience of completely drowning with no possibility of doing anything, we’re touching our deepest fear, the fear of death, the death of who and what we think we are. We all have an intellectual realization that we’re going to die, but very few of us know it’s really going to happen, until some tragedy makes it painfully obvious that it actually is happening. The willingness to stay present with this fear, is the gift of courage. The power of courage is the power to transform fear into loving compassion. Sogyal Rinpoche, the author of the Tibetan Book of Living and Dying said:

When we finally know we are dying, and all other beings are dying along with us, we start to have a burning, almost heart breaking sense of the fragility, and preciousness of each moment and each being, and from this can grow a deep, clear, boundless compassion for all beings.

I had never fully appreciated the depth of my father’s Christian faith until he was on his deathbed in 1986. He gathered his four children around him, we held hands, and he offered a deeply heart felt prayer to our heavenly father thanking him for his love in life and in death. He said ‘I’m not afraid to die, it’s ok I’ve had a good life.’ I still cry sometimes when I realize that the power of his prayer isn’t in the past or future, it’s now. And through this realization I’ve learned a deeper appreciation of our living presence in this moment. The birth of our physical bodies happens now; the dissolving of our bodies in death happens now.

I was talking with senior Zen teacher Reb Anderson some years ago about death. He told me that his intuition is that whether there is rebirth or not after we die, the momentum of the practice continues. For me this means the momentum of our spirit of inquiry continues regardless of whatever we think happens after death. Reb said he realizes that because of sleep deprivation, rising around 4 am for the last 50 years, his life will probably be 10 to 15 years shorter than it otherwise would have been. He then told me, ‘That’s ok, I’ve had a good life.’

This gave me a still deeper appreciation for my father’s spirit of inquiry, I realized he also had a deep intuition of Sogyal Rinpoche’s saying about death’s teaching us about compassion. For him, me and my siblings dying along with him meant dying to the sense of separation from God’s love. His prayer was for us to surrender and receive God’s love as he had learned to do in his willingness to receive death. I’m grateful to have such a wonderful father, and to have such a wonderful Zen teacher, both of whom intimately know the compassionate heart of death. Yogananda said: ‘It’s ok to pray for things, and to be thankful for them. It’s far better to pray for God’s love, to pray for the courage to receive and give her compassionate love, and instead of thanking her for things, thank her for her love.’ 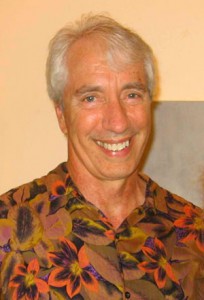