By Roger Hawkins on June 26, 2017 in Uncategorized

“The mind is a bundle of thoughts. The thoughts arise because there is the thinker. The thinker is the ego. The ego, if sought, will automatically vanish. Reality is simply the loss of the ego. Dissolve the ego by seeking its identity. Because ego is not an entity, it will automatically vanish and reality will shine forth by itself. This is the direct method, whereas all other methods are done only retaining the attachment to the idea of the ego.”

The disciplined practice of searching for the separate self, or ego, is only complicated when we give in to our strong conditioning to attach to our thought energy in the search. We learn we can’t do anything about this strong conditioning, it will endlessly arise along with thought energy again and again, like the never ending waves on the surface of the ocean. If we’re willing to watch the waves of thought energy, the waves of sensations, arise and dissolve by themselves, we can’t help but begin to become aware of the alive presence of the ocean itself, our actual being.

Nisargadatta was asked: “If the ultimate itself has always been what I am, why am I not aware of it?” His reply was “Because you are attached to the idea that the awareness looking out of your eyes right now isn’t the ultimate itself.” What is the actual substance of the idea that our true identity is perceivable, describable, and can be limited and confined? Allowing our thought energy to dissolve is a powerful reminder that our actual being is nothing the can be grasped, that we are not anything that can be captured as an object of thought. So it’s said that enlightenment is the merely the end of error, the error of attaching to thoughts about ourselves as real.

From the teachings of Anandamayi Ma 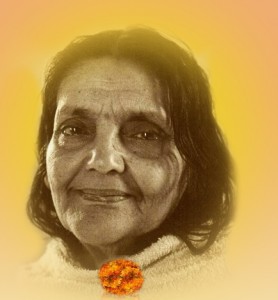 Who can tell at what moment the flame of illumination will blaze forth? For this reason, continue your efforts ceaselessly without flagging. Gradually you will get more and more deeply absorbed in Him – He and He alone will preoccupy your thoughts and feelings. For the mind ever seeks that which gives it proper sustenance, and this can’t be provided by anything other than the Supreme Being Himself. (She uses the words He, His, Him, referring to Brahma, God, the ONE source of all creation.) Then you will be carried away by the current that leads to your Self. (In this context, current refers to the living flow of human experience, feeling, seeing, hearing, and thinking.) This current is all that is, it is the continual flow of our true nature.

You will discover that the more you delight in the inner life, the less you feel drawn to external things. In consequence the mind becomes so well nourished with the right kind of food, that at any moment the realization of its identity with the Self may occur. After genuine contemplation, worldly pleasures become unalluring, dull, entirely savorless. This doesn’t imply anger at or aversion to anything of the world; when the deeply penetrating spirit of unattachment becomes a living inspiration, one begins to discriminate as to the true nature of the world, until finally, with the glowing certainty of direct perception, the knowledge of its illusory nature arises. All sensory experiences, as well as our ideas of being a separate self, are realized to be sparkling bubbles arising and dissolving on the surface of the current of our true nature.

Everything becomes smooth once the blessing of His touch has been felt. It is just as when bathing in a river, one at first swims by one’s own strength; but once caught in the current, whether a good swimmer or not, one is simply carried away. When intense interest in the supreme quest awakens, ever more time and attention will be given to religious thought, religious philosophy, the remembrance of God as immanent in all creation, until thereby all resistance is allowed to dissolve.

Suppose some people go to bathe in the sea and make up their minds to swim ahead of everyone else; consequently they will have to look back. But for him whose one and only goal is the ocean itself, no one has remained for whose sake he looks back or is concerned; (transcend and include, not exclude concern for others) and then, what is to be, will be.

Give yourself up to the wave, and you will be absorbed by the current; having dived into the sea, you do not return anymore (Attachments to the sense of a separate self just continually fall away). The Eternal Himself is the wave that floods the shore, so that you may be carried away. Those who can surrender themselves to this aim will be accepted by Him.

But if your attention remains directed towards the shore, you cannot proceed – after bathing you will return home. If your aim is the Supreme, the Ultimate, you will be led on by the movement of your true nature. There are waves that carry away, and waves that pull back. Those who can give themselves up, will be taken by Him. In the guise of the wave (sometimes in the wave of deep grief, sometimes in the wave of deep joy) He holds out his hand and calls you, come, Come, COME!