By Roger Hawkins on December 25, 2015 in Uncategorized 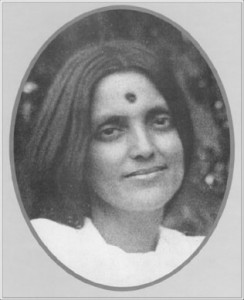 I’ve written a couple of times about the great 20th century Indian saint Anandamayi Ma. She is considered to have been an actual incarnation of the Divine Mother in Indian lore.  She spent the last 55 years of her life traveling around India spreading her teaching of Bhakti Yoga to many thousands of devotees.  Many of them have said her most amazing characteristic is that for anyone who was fortunate enough to have spent some time in her presence, they couldn’t help but have the desire to receive the divine presence awakened, or further enhanced from inside their being. One of her most powerful teaching methods is that of kirtan, the singing of devotional songs to the Lord, the Hindu name for the divine presence.

I’m attaching her singing of ‘Hey Bhagavan’ which is Hindi for O’ Lord. The spirit of her song is the calling to the Lord to shower all beings with her love, while calling all beings to receive her love. If we just allow ourselves to open to her spirit, with persistent devotion, we will at least begin to have the actual living experience that there is nothing separating us from the love of the Divine Mother.

View all posts by Roger Hawkins →

The Freedom to Love this Life
Merry Christmas!

One Response to Receiving the Divine Presence